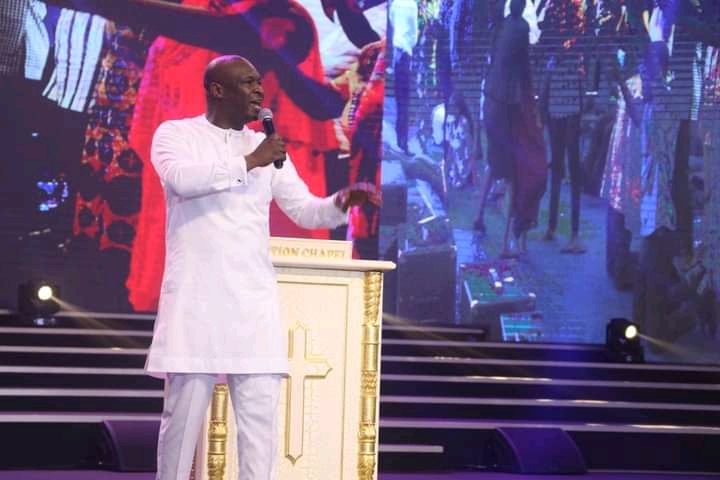 Apostle Joshua Selman Nimmak is a renowned revelational teacher of God’s word, and the founder of Koinonia A weekly program organized by Eternity Network International in Zaria Kaduna and Abuja Nigeria.

Apostle Joshua Selman hails from Jos, Plateau state in Nigeria but was raised and schooled in Zaria, Kaduna State.

The supernatural manifestation of Gods power in his life attests to the fact that he had received an early calling to serve God.

He got born again as a child, during a Sunday School session.

In his Secondary school days, God brought a mentor his way who helped him formulate a quiet-time time table and also taught him the basics of Christian character.

This really helped as he had complex issues and also the challenge of how to reconcile his dreams with all he was seeing around him.

Therefore, he was opened up to the motivation that he needed as he really loved God. He then began to pursue God truly and sincerely from his heart.

As a teenager, his unwavering love for God even at the time caught the attention of a lot as he had an inclination for spiritual things.

Growing up the Apostle was always found alone reading and studying the bible diligently while his peers were playing.
That helped in preparing and shaping him for the task ahead.

Shortly, he received the baptism of the Holy Spirit after a man of God who was invited ministered and thus began his ‘journey’ to the realm of the supernatural in God.

Himself and four other friends began to do the extraordinary in their school by simply applying their faith. Amongst other miracles, this birthed the healing of a stammerer.
Along the line, some of the things he walked in were called heresies. This made himself and his friends backslide but that changed by the encounter he received on the 2nd of December, 2002 where someone tapped him on the hand while he slept and as he awoke, he knew it was Jesus though he couldn’t explain how he knew.

This was his first encounter with Christ. He then began to cry profusely as he rededicated himself for the Master’s use.

Record holds that he had a dream in which he was ministering in the university and also started having encounters with heavenly personalities and notable apostles of God.

He had his tertiary education at the Ahmadu Bello University, Zaria, Kaduna State, Nigeria where he studied chemical engineering and also had the opportunity to begin his work as a minister of God as an undergraduate preaching and sharing the gospel to fellow students in school with the help of his friends.

Apostle Joshua Selman’s ministry started when he was on campus in Ahmadu Bello University, Zaria.

While in the University, his hunger for God grew. He would often go to the dam to pray and ask God to reveal to him his purpose in life.

One night, he had a vision in which he was standing in front of a tower that looked like one of the University hostels, suddenly, he saw a sea of people having no end.

They were all crying and sobbing saying there was no food and water. He immediately felt immense compassion for them.

In the vision, it became like he had the key to their solutions and they affirmed that he was the reason they were where they were. He then told them he was coming to rectify that right away after which he woke up.

This was when he knew that God had called him to be a preacher and a minister.

His most dramatic encounter was when Jesus Christ Himself appeared and stood before him. All Jesus did was stretch His hand towards him and a great beam of light came upon him.

That encounter brought a level of anointing and understanding into his life as he began to have extraordinary insight into the Word like never before.

Along with his friends, Apostle Joshua Selman maximized the privilege they got to share with their fellow students the love of Jesus Christ.

They continued in that trend and preached at every program that they were permitted to.
History has it that the anointed man of God was heavily used by God during his university days in prophetic, in healing the sick and performing miracles.

It was in the light of his discovery of the powerful anointing upon him and following the leading of the Holy Spirit, wasted no time in founding a ministry called Eternity Network International in Zaria, Kaduna State in March 2011.

The ministry organized a program named KOINONIA in the same year of 2011 and the same venue.

The term Koinonia is a Greek word which literally translates to “a Christian fellowship or communion, with God or, more commonly with fellow Christians”.
And truly it has been a source of miracle and blessings among Christians as indicated by the testimonies of people who have attended the program.

Apostle Joshua Selman has been mentored and influenced by a wide number of heavily anointed men of God.
He is a product of many graces/ divine impartation and this is seen when he talks about the different men of God that have at one time or the other imparted his life.

As of the time of writing this biography Apostle Joshua Selman is not yet married. Although according to the Apostles best friend as gathered and goes by the name Olufukeji “Ejimi” Adegbeye in a message to Lady Sandra Areh’s social media page in 2019 on her birthday indicates that he (the Apostle) is set to get married.

The Apostle who has dedicated large path of his youth to obeying the call of God upon his life is now set to marry Lady Sandra Areh whom is also referred to as Selwoman after the Apostles surname “Selman”.

The true net worth of this man of God can be quite hard to calculate, this is because asides assets and ministration earnings, there may be other hidden people that may feel blessed with the Sermons of the man of God and end up gifting his fortunes.

Some of the quotes by Apostles joshua selman which also can be used as life points include: